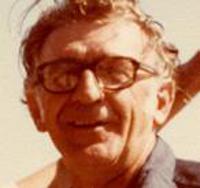 Affectionately known on Boathouse Row as "Mr. Necz", Mr. Steve Neczypor's passion for rowing was heavily influenced by his sons'  careers at Father Judge from 1965 through 1976.  Steve spent many years supporting, encouraging, and cheering on many rowers, while also working hard to give back to the close-knit rowing community.

Steve, a World War II Navy veteran became fast friends with the Father Judge Crew Head Coach Tom Rafferty. Together they tirelessly worked to turn an old rag factory in Manayunk into the Schuylkill Boat Club; Mr. Necz served as President of this club from 1970 thru 1975.  After a detrimental flooding of the Schuylkill, Coach Rafferty, Tom Kealy, and Mr. Necz joined forces once again to restore Boathouse Row's Crescent Boat Club.  His continued giving did not end there, as he served as President from 1975 thru 1983.

In 1983, Steve founded Neczypor Dynamics, a company that produced carbon fiber racing shells and specialized in the highest level of shell repairs.

In the honor of continuously giving back, The Steve Neczypor Memorial Regatta (also known as the "Mr. Necz Regatta") was established in 2014 to honor his passion, support, and devotion to the rowing community.   Steve son, Anthony, continues to operate Neczypor Dynamics and Shell Repair USA to keep the family business alive.  Anthony is the brains behind this regatta as a memorial to his father and everything he learned from his father and the sport of rowing.